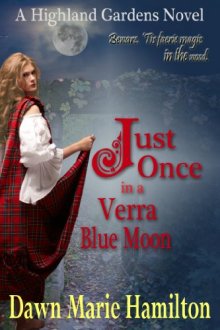 Win an eBook copy of
Just Beyond the Garden Gate
Book 1 in the Highland Gardens Series!

Entry via Rafflecopter below.

Grasp the fantasy. Dare to dream!

I like romance spiced with fantasy. From contemporary to paranormal, the hint of magic brings a smile. The magic can be subtle or a trip to the moon. I love it all. The Highland Gardens series are historical time travel romance adventures with sexy Highlanders, scheming faeries, and one mischievous brownie.

Just Once in a Verra Blue Moon, the second book in the series, came to life after reading some Asian gem lore about moonstones. Perfect for interlacing with faerie lore. “The Sithichean, the faeries of the ancient Highlands, had a special affinity for moonstones. Enamored by the pale, lustrous, blue color resembling that of moonlight, they found the best of these unique stones on the shores of their sensuous faerie paradise Tir-nan-Óg—land o’ heart’s desire—having washed ashore on the tides when the sun god and moon maiden were in a particular heavenly harmony.” A new legend was born…

Just Once in a Verra Blue Moon - Highland Gardens, #2

What happens when a twenty-first century business executive is expected to fulfill a prophecy given at the birth of a sixteenth-century seer? Of course, he must raise his sword in her defense.

Believing women only want him for his wealth, Finn MacIntyre doesn't trust any woman to love him. When, during Scottish Highland games, faerie magic sends him back in time to avenge the brutal abduction of his time-traveling cousin, he learns he's the subject of a fae prophecy.

Elspeth MacLachlan, the beloved clan seer, is betrothed to a man she dislikes and dreams of the man prophesized at her birth, only to find him in the most unexpected place—facedown in the mud.

With the help of fae allies, they must overcome the treachery set to destroy them to claim a love that transcends time.

Journey from the lush gardens of the Blue Ridge Mountains of North Carolina to the Scottish Highlands of 1511 with 'Just Once in a Verra Blue Moon'.

Elspeth caught her breath. Everywhere Finn touched her as they tried to break apart, her skin tingled. When their gazes met, everything else faded away. The world reduced to only the two of them, and his mouth dipped toward hers.


His lips grazed hers and fire blazed through Elspeth to her toes, the moment lasting an eternity. Finn’s tongue pushed between her lips, seeking entrance. Her mind reeled. With little thought, she wrapped her arms around his waist and twirled her tongue around his. Passion. Unlike the minimal pecks she’d received from Alexander, Finn’s fierce kiss conquered, possessed.

The sound of a throat clearing broke the spell, and Finn’s sinful mouth pulled away, leaving behind a fracture in the foundation of Elspeth’s expectations for the future.

How could she go on as before?

The Scottish Highlands—a place where faeries and brownies and other fae creatures dance through time. On occasion, so do mere mortals.

Determined to regain her royal status, a banished faerie princess accepts a challenge from the High-Queen of the Fae to unite an unlikely couple while the clan brownie attempts to thwart her.

Passion ignites when a faerie-shove propels burned-out business consultant Laurie Bernard through the garden gate, back through time, and into the embrace of Patrick MacLachlan. The arrogant clan chief doesn’t know what to make of the lass in his arms, especially when he recognizes the brooch she wears as the one his stepmother wore when she and his father disappeared.

With the fae interfering at every opportunity, the couple must learn to trust one another while they battle an enemy clan, expose a traitor within their midst and discover the true fate of the missing parents. Can they learn the most important truth—love transcends time?

Journey from the lush gardens of the Blue Ridge Mountains of North Carolina to the Scottish Highlands of 1509 with 'Just Beyond the Garden Gate'.

Dawn Marie Hamilton dares you to dream. She is a 2013 RWA® Golden Heart® Finalist who pens Scottish-inspired fantasy and paranormal romance. Some of her tales are rife with mischief-making faeries, brownies, and other fae creatures. More tormented souls--shape shifters, vampires, and maybe a zombie or two--stalk across the pages of other stories. She is a member of The Golden Network, Fantasy, Futuristic & Paranormal, Celtic Hearts, and From the Heart chapters of RWA. When not writing, she's cooking, gardening, or paddling the local creeks with her husband.