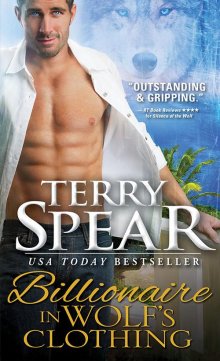 My Favorite Scene From Billionaire in Wolf’s Clothing

Thanks for joining us on Night Owl Reviews.

What was your favorite scene to write for A Billionaire in Wolf’s Clothing?

I have tons of favorite scenes in the story—when he goes out to rescue her, when they rescue the boy and all the entertainment after that. Rafe and his friend, brother, and men he employ are having a ball with Jade’s son. Everything from getting him furniture, shopping for toys, having him exercise with them, taking him to the wolf reserve and Disneyland. It was lots of fun showing their wolves’ inner child. Despite being a bunch of footloose bachelor males, they’re enjoying helping out with the boy. It was also great being able to show how all these males who are not part of a pack gravitate around Jade and her son as if they are becoming a pack. Just like real wolves might.

And of course there are ample opportunities to show the billionaire’s life—the private plane, his own restaurant, cabin in the woods, yacht, and beachfront property, his love of cars. Yet, he’s just as interested in helping to promote Jade’s clothing lines and even shopping for clothes for the boy is hilarious. The whole story was fun.

First in a BRAND-NEW SERIES from USA Today bestselling author Terry Spear about filthy rich werewolves and the women who are more than their match.

Billionaire werewolf Rafe Denali always gets what he wants, and he always trusts his gut. When sexy she-wolf Jade Ashton nearly drowns outside his beach house, he knows better than to bring her into his life. But there's something about the fierce wolf that triggers his most primal instincts...and having seen her, he knows she will be his.

Even if she's hiding a dark secret that could get them killed...

Excerpt from Billionaire in Wolf’s Clothing:

She thanked him, but she continued to look through the sales clothes.

Toby began to run his hands through soft sweaters and picked one up to hold against his chest like she did when she was measuring him for size. “This one, Mommy.”

It was a purple sweater for a little girl.

“How about you look at these sweaters.” Jade motioned to another table and folded the purple sweater back onto its stack. “They’re for boys.”

Toby eyed the purple sweater, then nodded and headed for the other table. He picked out a bright orange one, and she thought he’d look like a pumpkin. “This one, Mommy.”

She hated to look at the price tag. The fall clothes didn’t have any sales.

“Looks good,” Rafe said, smiling, his hands folded across his chest. “Just the one I would have picked.”

Toby grabbed another and offered it to him. “Here’s ’nother.”

Edward and Aidan were standing near the door in the little girls’ section, looking highly amused. Jade imagined that all three men were totally out of their element here. Toby handed the sweater to Jade and then glanced at Rafe’s stance and copied it, arms folded over his small chest, watching Jade.

When she pulled out a brown gingham shorts set with a train appliquéd on the T-shirt, Toby frowned at it, then looked to see if Rafe liked it. He raised his brows. Toby shook his head. Rafe shook his head.

“Oh, for heaven’s sake, you two.” Jade kept pulling out different shorts sets that met with negative responses until she found a blue T-shirt set with a brontosaurus appliquéd on it that she knew Toby would love. He loved all things dinosaur. Wolves too, but finding them in toddler’s clothes was nearly impossible. She had to order those online.

But then he looked at Rafe to see his take on it, and Jade gave Rafe a warning look that he’d better like it. Although he wasn’t paying any attention to her, Rafe gave Toby a smile and a thumbs-up.

She sighed and found one with baseball bats, another with a puppy dog, and a few others she got both to agree on. After trying a jacket on him, making sure it was a little bigger so Toby could wear it longer, she picked up everything else she needed, including jeans, sandals, another pair of sneakers, and underwear.

Rafe carried her merchandise to the counter. Rafe pulled out his credit card and handed it to the clerk. “Maybe the owner or manager would be interested in your children’s specialty designs,” Rafe said.

“Janine Pragley is in her office. I’ll call back there, if you’d like to talk to her,” the store clerk said.

“But…” Jade looked down at Toby, worried about having him with her while she tried to talk to the manager.

“Toby and I will just wait for you with the others. Right, Toby?”