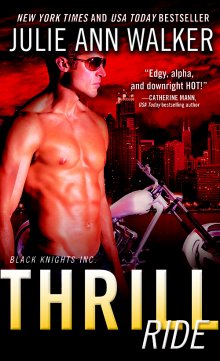 Checking in with Julie Ann Walker

Enter to win a Print book of Rev It Up (Book 3 in the Black Knights Inc. Series, and where readers first meet Rock and Vanessa, hero and heroine of Thrill Ride)! Ends 4/26/13.

Update Your NOR Contest Passport ADDRESS - REQUIRED FOR ENTRY!

What do you think makes Vanessa Cordero a great romance heroine?

Oh, that's easy!  Vanessa makes a great romance heroine because she stands by her man.  Even when the whole world is convinced Rock is a killer, when everyone around her thinks he's gone rogue, she listens to her heart and refuses to believe the charges leveled against him and the voices shouting at her that he's no good.  Then she goes one step further.  She puts her own neck on the line to try to help him clear his name.  She's brave, determined, and above all else, loyal.  You just gotta love a gal like that!  I know I do!  Go on with yo bad self, Vanessa!  *z-snap*

In your eyes, what are the ultimate bad boy characteristics? Does Rock have any of these traits?

Bad boys are generally self-sufficient - lone wolves, if you prefer - a little bit emotionally tortured, usually aloof, and almost always arrogant.  Rock definitely exhibits all these traits.  When Vanessa finds him, Rock's been living alone in Monteverde Cloud Forest, a Costa Rican jungle, for months.  Doesn't get much more self-sufficient than that.  As for emotional scars?  Boy howdy, does the ragin' Cajun ever have them.  But I can't go into more detail for fear of spoilers.  You'll just have to pick up the book.  (ß Unabashed plug for readership. *wink, wink*) And Rock is aloof in the sense that he tries his darndest to keep Vanessa at arm's length, you know, because of those emotional scars I refuse to tell you about.  LOL!  (See, I just did it again.)  And last but not least, yes, Rock is arrogant.  But only so much as he should be.  He's a man who's been tested by life again and again and managed to come out the victor.  So, what arrogance he has is certainly well-deserved.

Rock and Vanessa try to deny their passion for a long time. Did you have fun building up the tension between these two?

Ha!  These two come together on the pages much more quickly than my heroes and heroines generally do.  It surprised me as I was writing just how much Rock and Vanessa couldn't seem to keep their hands off each other. :-D  I love it when characters take on a life of their own and pull me on a different emotional journey than the one I had planned for them.  That's always such a blast!

What was it like coming out of the publishing gates with several titles under contract?

Oy.  Truthfully?  It was pretty harrowing.  Not only did I have a back-to-back-to-back release, accompanied by all the blog writing, interviews, and general hoopla surrounding such an event, but I was also contracted to have my fourth book turned in to my publisher in the middle of it all.  For about eight weeks I didn't get more than four to five hours of sleep a night.  I never put on makeup.  I rarely got out of my pajamas.  Showers were few and far between.  And I only left my PC to eat something or to go to the bathroom.  It was… manic, I guess would be the word.  But it was also so worth it.  It's been a hell of a ride, and I wouldn't change a second of it!

What’s up next for the Black Knights?

JAW: BORN WILD, the fifth book in the series, is due to hit shelves this coming November.  It features "Wild Bill" Reichert and Eve Edens.  I think fans will be eager to find out what the hot fuss is between those two since their story has been such a long time in the making.  It is very angst-y, even if I do say so myself! ;-)

Ex-navy SEAL Rock Babineaux is as Cajun as they come—spicy, sexy, and more than a bit wicked. But would he actually betray his country? Even his best friends on the special-ops Black Knights team aren't sure they can trust him. Now the target of a massive manhunt, Rock knows the only way to protect the team—especially his partner, Vanessa—is to run...

She Won’t Back Down…

Rock might think he can outmaneuver them all, but he hasn't counted on how stubborn Vanessa Cordero can be. And she refuses to cut him loose. Sure, her partner has his secrets, but there's no one in the world she'd rather have by her side in a tight spot. Which is good because she and Rock are about to get very tight...

Julie Ann Walker is the New York Times and USA Today Bestselling Author of the Black Knights Inc. romantic suspense series. She is prone to spouting movie quotes and song lyrics. She'll never say no to sharing a glass of wine or going for a long walk. She prefers impromptu travel over the scheduled kind, and she takes her coffee with milk. You can find her on her bicycle along the lake shore in Chicago or blasting away at her keyboard, trying to wrangle her capricious imagination into submission. Look for the first four books in her fast-paced series: Hell On Wheels (August 2012) In Rides Trouble (September 2012) Rev It Up (October 2012) and Thrill Ride (April 2013). For more information, please visit www.julieannwalker.com or follow her on Facebook www.facebook.com/jawalkerauthor and/or Twitter @JAWalkerAuthor.