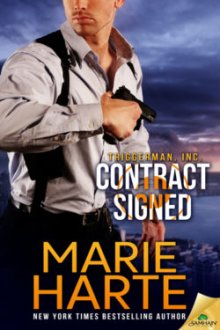 Not sure what I wanted to do, but knowing I wanted something a little different than straight up contemporary, I settled on something fun and dangerous—assassins. I’m not sure if it was before or after I’d seen the latest Hitman movie, but I know I’ve always been intrigued with that level of danger in conjunction with romance. And to make it even more exciting, I thought, let’s add a baby and really throw the characters a curveball.

And so Triggerman Incorporated was born. For some reason I had the phrase Signed, Sealed, and Delivered in my head, and I fiddled with the titles so that each was part of the series.

Triggerman Inc. (TMI), is a trilogy. Each book carries the overarching plot of just who wants the guys dead and where the heck the baby dropped on Noel’s doorstep came from. I’ve been having a ton of fun creating my own clandestine organization with their own rules.

My assassins pick and choose their bad guys to eliminate, and of course, they find themselves challenged by three very special women. As I speak, I’m working on edits for the second book and readying to write the third.

January 17th, CONTRACT SIGNED releases. It’s Noel’s story, where it all starts. Someone drops a baby on his doorstep, and it’s his sexy neighbor who swings by to make sure all is well. Except it isn’t.

SECRETS SEALED will come this spring to Samhain Publishing, and in it, Deacon, the playboy thief, plays bodyguard to a woman who wants nothing to do with him. A challenge if ever he’s heard one. Then too, there’s the danger stalking them. And someone is not who she seems…

Finally, in SATISFACTION DELIVERED, coming this summer, Hammer tracks down a woman who’s doing the wrong things for the right reason. But will he forgive her or listen to lies and do the unthinkable?

Enjoy the Triggerman Inc. series. To read more about Three assassins and a…baby? Check out my website at marieharte.com.

Noel "Ice" Cavanaugh's method is foolproof. Get in, do the job, get out, melt away without a trace. Chill out until his next mark is assigned. Neat. Tidy. No mistakes.

This time, though, something isn’t right. Two somethings. First a random attack that feels not-so-random. Then he discovers someone’s left a baby on his doorstep with a note claiming it’s his. And the sexy neighbor who found the boy first has too many questions in her eyes to ignore.

When her handsome, mysterious neighbor suddenly asks her out on a date, Adeline Rose has suspicions he’s fishing for “help” with his bundle of…joy? By date’s end, she’s convinced Noel’s just as distant as he seems—until a scorching goodnight kiss ends with sex against the nearest wall, the heat between them burning away all thoughts of careful.

Now Noel has more than one problem on his hands. Splitting baby duty between three badass assassins, figuring out how to fit more time with Addy into his no-room-for-error schedule…and keeping both of them safe from the danger he’s increasingly sure has followed him home.

Warning: Beware a killer with a heart of gold, a baby who needs constant changing, and unrequited love that’s actually quite…requited.

Caffeine addict, boy referee, and romance aficionado, NY Times and USA Today bestselling author Marie Harte has over 100 books published with more constantly on the way. She's a confessed bibliophile and devotee of action movies. Whether hiking in Central Oregon, biking around town, or hanging at the local tea shop, she's constantly plotting to give everyone a happily ever after.