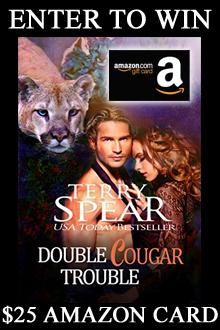 Enter to win a $25 Amazon Card and an eBook from Terry Spear! Along the way be enchanted by the blurb for her book, "Double Cougar Trouble". Twin four year olds need their father!

Jack Barrington still has an army obligation that takes him away from the woman who had enchanted him when they were both in college, but Dottie Hamilton refuses to marry a man in the military because of the problem of raising cougar shifter cubs in foreign lands and the worry he may be killed while overseas like her cousin was, leaving a wife and three little ones behind. When Jack returns home to see his family and Dottie’s only living relative, her aunt, she convinces Dottie to bring her twins home to see her—and to see him. Jack has two-and-a-half weeks to convince Dottie to wait for him while he finishes his last three months on active duty. And learns the truth. Dottie’s twins are his own flesh and blood.

Dottie has made a lot of mistakes in her life, including providing a father for her children by marrying a man, who turns out to be an arms’ dealer. When Jack returns to her after finishing his army obligation, he’s determined to prove he’s the mate she needs in her life, and he has every intention of being the father to his four-year-old twins. Now the criminal deeds of Dottie’s dead ex-husband have come back to haunt her. And she and Jack and their cougar friends will have to band together to stop the arms’ dealers before they destroy what the cougars hold dear.

MORE BOOKS BY THIS AUTHOR