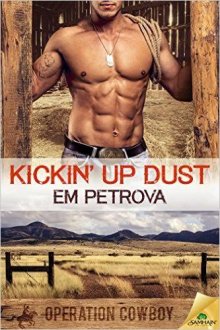 Get an Exclusive peek into Em Petrova's hot new cowboy romance. Your internet page is about to get hot!

This Marine follows the rules. This cowgirl is all about breaking them.

After losing his best friend and CO, Matt, in combat, Brodie Bell didn’t think his spirits could sink any lower. He was wrong. One look at his and Matt’s storm-flattened hometown nearly levels him.

Los Vista needs a leader, and as Brodie takes the weight of the world on his shoulders, he comes up with a plan. Merge the two ranches left standing, pray for a good calving season…and keep his hands too busy to get busy with Matt’s sexy little sister.

Danica was in pigtails when Brodie and Matt went off chasing glory. Now she’s a woman with a broken heart, but if Matt knew of the depraved cravings Brodie ignites in her body, he’d haunt her from the grave.

As they work to mend miles of broken fences, Brodie fights to ignore Danica’s tiny cutoff shorts and mile-long legs—and to ignore the “weapon” that’s locked and loaded in his Levis. Because the last thing he wants is to dishonor his friend’s memory by ravishing the sweetest little cowgirl he’s ever laid eyes on.

Warning: Involves a sweet and sassy ranch girl who knows her way around a rope, and a Marine turned cowboy who’d like to tie her down and spank her until she begs for more.

Get a Copy on Amazon

Just thinking about her sent a pang of lust straight to his groin. More shit to tamp down and deal with. He couldn’t touch Matt’s baby sister.

Not a hint of a breeze blew. So much like the desert, but this place felt different and smelled different, and he was damn well different here.

Leaving behind the last five years and moving forward was his new mission. But what would he do to occupy his time? The ranch had enough work for him and Pa, he supposed, though it wouldn’t be lucrative. How long before Brodie’s money ran out?

A year maybe, if he lived frugally. A year in a dead town like this wouldn’t be a picnic. There wasn’t even a country bar where he could nurse a beer and shoot the shit with the guys.

The guys…what were they doing? Making plans as he was? At least they had each other.

The echoes of Danica’s tears echoed his skull. Without thinking, he brought the neck of his T-shirt up to sniff. Pure, sweet woman.

He bit off a groan and adjusted his cock.

The kitchen door cracked. “You all right, Brodie?” his momma asked quietly.

“Yes’m. Coming in now.” He didn’t move to get off the rocker, though. He stared into the darkness.

After the initial shock of having his son’s dog tags in his hand, Mr. Pope had gotten to talking. At first it was mundane conversation as you would exchange at a funeral—about the weather, crops. The Popes were running about two hundred head of cattle. They had a lot of bulls, and that was one thing Brodie’s family ranch was missing.

The screen door creaked shut. In the back of his mind, he noted his mother retreating into the house, leaving him.

That was good because he couldn’t trust himself not to make a noise of despair as his mind moved on to Danica. How he’d reached into the bag a second time and placed the small, stuffed teddy bear into her hands. A bear she’d given Matt when he’d left for boot camp. Its furry paws were stitched to a red satin heart that said I love you.

Brodie bit down on his lip and shook himself. Then he got up and went inside. Going through the house, he shut off the lights his mother had left to guide him to his old bedroom. When he reached it, he kicked off his boots and started to yank his shirt over his head.

As he got a full whiff of Danica, he hesitated. Somehow, her nearness comforted. Maybe…just maybe it would keep the demons at bay long enough for him to catch a few winks. He threw himself into bed fully clothed and slept for eighteen hours.

Get a Copy on Amazon

Em Petrova lives in backwoods Pennsylvania, where she raises four kids and two feral kittens and pays too damn much for utilities. But seeing her sexy husband tromp out back with a chainsaw in hand is well worth the frustration of living miles from a mall. She adores writing sex scenes and anything paranormal. When she has the opportunity to mix the two, she's in her element. You can learn more about her smutty reads at www.empetrova.com.