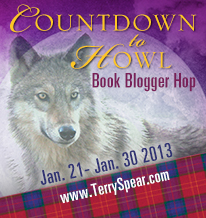 Characters that Touch at the Heart of Readers

Comment to Enter to win a Terry Spear Print Prize Pack of Heart of the Wolf, Legend of the White Wolf and Wolf Fever! Ends 2/8/2013

Creating characters that touch at the heart of readers—that are fun-loving, but human, in part—as they’re wolfish as well—is the enjoyable component of writing the series. In this scene, Duncan MacNeill is having a very bad day. And that’s the human equation. We’ve all had days like this. But next is the wolf part. And of course, it wouldn’t be half as much fun is it didn’t have some humor.

Duncan is an hour and a half late arriving to have a drink with Shelley Campbell. He has perfectly good reasons why. But she’s miffed and not about to listen to them. Of course when she doesn’t answer her door, he thinks the worst. After all, no woman who offers to buy him a drink would cancel just because he was late in arriving. Which means she could be in trouble—Highland warrior and wolf thinking. And he’s got to protect her.

Wouldn’t you love having such a wolfish man in YOUR life? 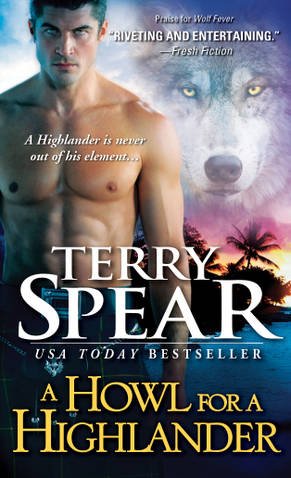 A Highland Wolf on a Mission...

Duncan MacNeill is hell-bent on catching the thief who's stolen the clan's fortune and run off to Grand Cayman Island. Duncan has rarely left his homeland and he couldn't care less about an island paradise. He never expected to find a beautiful distraction who will show him just how appealing paradise can be...

Lone wolf and botanist Shelley Campbell headed to the island to study the old growth forests. She didn't count on meeting a handsome Highlander who can't keep his paws off her.

Excerpt from A Howl for a Highlander:

He was already in a foul mood over the reservation mix-up, losing the only lead he had for Silverman that might have given him some inside knowledge, finding no other place to stay, and now standing up Shelley. He hoped she wouldn’t be too sore, and he hoped he could curb the annoyance he was feeling enough to enjoy a drink with her.

When he finally arrived at Shelley’s villa, he found the place dark—not a good sign. Knocking at the door and ringing the bell didn’t get any response.

He didn’t smell any sign of any other wolves or strictly humans having arrived, so he was sure she hadn’t had any recent company.

He called out, “Shelley, it’s me. Duncan MacNeill. Are you all right?”

He didn’t believe for one moment that she intended to ignore his arrival just because he was an hour and a half late. Not after he’d gone out of his way to be chivalrous to her earlier, and not without learning why he was so late in arriving.

Able to see with his wolf’s night vision, he sniffed the air for anything that would warn him she’d been in trouble, trying to sense another wolf, female or male, or another male visitor. Nothing. But she wouldn’t, couldn’t be ignoring him.

He paced across the front porch, went around the back, and looked at the white sandy beach. It was void of people, with no one swimming in the dark water, either. Unless she went for a walk along the beach and was way out of sight.

He peered at all the windows, seeing no movement or lights in any of the rooms. To his way of thinking, she was alone, defenseless, and vulnerable, and he had to ensure she was either not at home or was all right. If nothing else, he had to explain why he was so late in arriving.

He knocked again. “Shelley, if you’re in there, let me know. Otherwise I’m going to assume the worst.”

When she didn’t come to the door and let him in or acknowledge she was there, he pulled out his handy lockpicks—standard lupus garou issue, unlocked the door, and peered into the dark villa.

He took a couple of steps into the room, looking for signs of a struggle, but saw nothing out of place and shut the door. “Shelley? It’s me, Duncan. We had a date to have a drink, but I had trouble—”

He stopped speaking abruptly as he caught a flash of fur. Then turning, he saw a wolf racing toward his left flank, eyes glowing green in the reflection of the front porch light, which was shining in through the living room window where the curtain was slightly parted. Her teeth weren’t bared as she leapt at him. Which meant she wasn’t truly angry with him or wanting to fight. It was more a territorial show, he thought. This was her place and he had intruded, despite warning her that he would to ensure she was all right.

He understood and welcomed her display of defending her territorial rights.

She was smaller than a male wolf, but the impact of her body and his unpreparedness to handle her jump knocked him back.

He smiled darkly as he regained his equilibrium and readied himself for another attack as she circled around and faced him again. Having wrestled with his brothers and cousins over the years, sometimes as wolves, sometimes as humans, and sometimes like this—human to wolf—he was game. He had to admit he’d never tackled a female wolf in such a manner.

The newness was not only refreshing but momentarily took his mind off his other troubles.

Her tail waved like a dog pleased to see its master—instinctively wanting to play. Her gaze was on his, watching his reaction, and he knew she was calculating her next move and his, too.

Adrenaline and testosterone raced through his blood, preparing him for the mock fight. When she lunged this time with no warning, he seized the ruff of her neck in a natural reaction to protect himself, and she exposed her teeth, an instinctive response in play or battle. He held on as she snapped and snarled, twisting her head to free herself from his iron grip. Still, she didn’t try to bite him, which told him she was only pretend fighting, showing her irritation in a wolf’s way for standing her up and breaking into her place without permission.

With a strong jerk of her head, she broke free of his titan grip, jumped aside, and again lunged. Not expecting her attack to follow so rapidly after the first, figuring she’d pause to determine her next strategy, he fell back, tripped over a suitcase, and landed on his back.

He swore she would have been laughing her head off if she could as a wolf. She quickly stood on his belly, triumphant, panting, chest heaving, looking down at him with a proud expression, eyes gleaming, and almost a smile. Yeah, she was damned amused. He’d been bested by a she-wolf and one flowery suitcase.

Purchase em>A Howl for a Highlander:

Each blog will showcase Terry’s latest novel, A Howl for a Highlander, and offer Wolf Prize Packs of different books in Terry’s series!

"Intense and swoon-inducing...The chemistry is steamy."—USA Today Happy Ever After

"Highlanders and werewolves. Be still my heart!"—The Good, the Bad, and the Unread

USA and Canada Shipping Only.