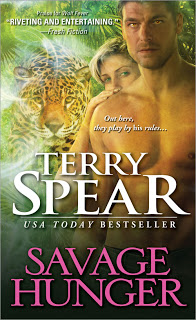 Enter to win a print copy of Savage Hunger!
Ends - 10/26/2012
***
Creating the Culture of Shapeshifting Jaguars
by Terry Spear

Jaguars in ancient times in South America and Central America were often revered as Gods and Goddesses. It’s fun digging into ancient history when researching a book. What role did an animal play in the history of certain cultures?

Not that the jaguars were so revered that they escaped massacre. Some of the rulers would wear the deceased jaguar’s wicked teeth around their necks, their skins as a cape over their shoulders, their heads as part of a headdress.

So to be revered wasn’t all that it’s cracked up to be.

Still, I have where Connor and Maya Anderson, as they visit the Amazon, are revered by the natives that live in the area. They are a jaguar god and goddess from the culture that’s been shared and passed on for generations.

Connor and his sister would prefer the natives didn’t know about them at all, but it seems as the natives travel as quietly as the jaguar, the shifters have missed spotting them a time or two while navigating the jungle, or shifting into their jaguar forms.

This can be a good thing—as they help the Connors out. But a bad thing when someone lets the word slip to outsiders about the jaguar shifters in their midst. The jaguar shifters can be a good omen so the natives love having them around. But like Kathleen, new to the world of jaguar shifters, says, what if the crops fail? Someone in the local village dies? The cattle become diseased? The fishing drops off? Would the shapeshifter jaguars be blamed for their misfortunes?

Maybe. That’s the problem with being revered. It can be a double-edged sword.

When I was young, I used to read about tales from around the world. The explanations for why nature was like it was. Mythologies from ancient Greeks and Romans, to Egyptians and Japanese, to Scandinavian and African, to South American and Native American and much, much more. I loved learning how these cultures turned their day to day worlds into mythologies and folktales to explain the happenings around them. Like why the sea is salty. And why a flower turns during the day to follow the path of the sun.

Some ancient peoples of the Amazon believed they could see the spiritual world through the jaguars’ eyes. The Mayans viewed the spots as a representation of the night sky, the sprinkles of spots on the jaguars’ skin being the stars on the velvet backdrop. Shamans were thought to turn into jaguars. So readymade shifters from ancient times served my modern day jaguar shifter stories well.

Once, many years ago, I watched a special where an indigenous South American tribe ate a kind of beetle for a religious ceremony. They ate them live. Now they’re a hallucinogen so the natives would get high on the beetles and have all kinds of neat out of this world experiences. The younger people had gone to smashing the beetles into a kind of paste and eating them that way to still enjoy the effects of the beetle. So here you have all these older people stuffing live beetles into their mouths, legs and feelers and all, chomping away merrily and grinning at the cameraman.

It’s amazing what I’ve read about or seen in nature shows, then later incorporated into a current book! Not that I included this in any book, but the concept of the older generations believing in something carries forth to the younger generations is in this book in a subtle way. In the jaguar shifter stories, the younger generation might not believe in the old folks’ tales, but when they see the shifters for themselves, they know the old folks were right.

Have you ever been there? Grandma and Grandpa shared some wisdom of the past and lo and behold, though it might be mired in a folktale way, some of it holds true?

When I was researching wolves, I had researched the connection of native peoples with the wolves. In some northern cultures, the natives believed that the wolves descended from the Northern Lights. The Native Indians revered the wolves for their loyalty to family and their hunting prowess and often used the wolves’ techniques to hunt their prey as well, as a unified force, keeping low to the ground. Sometimes the shaman would wear a wolf skin and head and claws and teeth. See a resemblance to the ones in South America who worshipped the jaguar?

With jaguars, the natives also revered them for their hunting abilities. So it’s interesting to note how often cultures from around the world were so similar, yet so different from each other.

In the South and Central American countries, jaguar references and jaguar statues are rampant still. That’s partly why I have Connor and Maya return to the Amazon. It’s a call to their wilder side. The jaguar.

What would you do if you ended up being a jaguar shifter? What if you found the jaguar of your dreams?

USA Today bestselling author Terry Spear has captured hearts worldwide by wrapping the realities of nature into the glorious romance of the wild. Now, she turns her award—winning imagination from the sexy werewolf hunt to the intense sizzle of jaguar shape-shifters.

As a jaguar he is graceful and gorgeous... 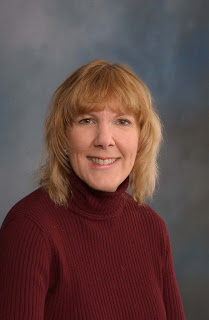 As a man he is passionate and powerful...

And he'll stop at nothing to protect what's his...

Bestselling and award-winning author Terry Spear has written a couple of dozen paranormal romance novels and two medieval Highland historical romances. Her first werewolf romance, Heart of the Wolf, was named a 2008 Publishers Weekly’s Best Book of the Year, and her subsequent titles have garnered high praise and hit the USA Today bestseller list. A retired officer of the U.S. Army Reserves, Terry lives in Crawford, Texas, where she is working on her next werewolf romance and continuing her new series about shapeshifting jaguars. For more information, please visit www.terryspear.com, or follow her on Twitter, @TerrySpear. She is also on Facebook at http://www.facebook.com/terry.spear. To purchase Savage Hunger, please visit Amazon, Barnes and Noble, and all other major booksellers.