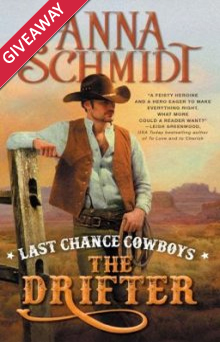 The Drifter - Where the Trail Ends, #1

"I barely know you, and yet there's something about you that I trust. But why?"

"You know me, Maria. I'm the guy trouble follows. Best if you keep your distance."

She ran the backs of her fingers along the line of his jaw. "And what if I don't want to keep my distance?" Her voice was barely a whisper.

"Fair warning," he murmured, and pulled her close.

Caught between a greedy corporation and a desperate love of the land, Maria Porterfield barely has time to mourn her father's death. If her family is to survive, it'll be up to her to take charge-but she can't do it alone. When a mysterious drifter rides into town, the handsome cowboy seems like an answer to her prayers. But Chet isn't interested in settling down, no matter how tempting the offer...

Chet made his way West looking for a fresh start-the last thing he wants is to get involved in someone else's fight. But something about Maria awakens a powerful need to protect the fierce beauty at all costs. He never thought he'd find love, but as danger presses in, he may find there's more beyond the next horizon than just another long and dusty trail.

Get Your Night Owl Newsletter

Anna Schmidt is a three-time finalist for the coveted RITA award presented annually by Romance Writers of America. Her novel A SISTER’S FORGIVENESS gave Anna her fourth finalist honor for the Reviewers’ Choice Awards from Romantic Times magazine. She has won that award twice before. Publisher's Weekly had high praise for Anna's WWII series--THE PEACEMAKERS--stating that Schmidt seamlessly integrates...actual events, and the courageous real-life individuals who fought against Hitler’s regime, with her fictional characters and their story, to produce a strong tale of hope and love in the face of insurmountable obstacles." The author of over twenty-five works of historical and contemporary fiction Anna has worked in the corporate world for two international companies, taught at the college level and is a popular presenter of hands-on workshops.